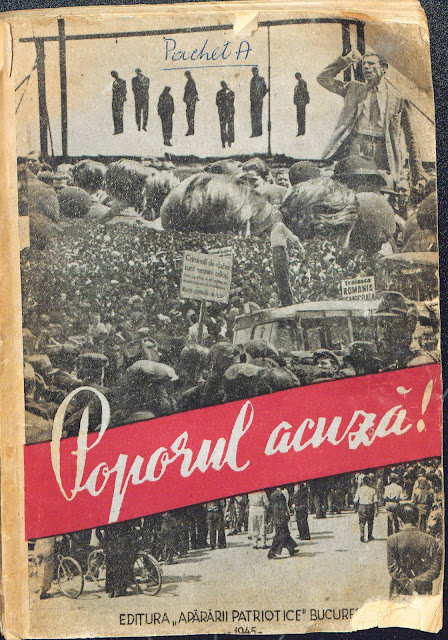 Michael Shafir: "Based on the Nuremberg model, People's Tribunals were set up in Romania by a decree issued by King Michael I on April 21, 1945. [...] There were two tribunals, one in Bucharest and the other in Cluj. The Bucharest tribunal sentenced only 187 people, the rest were dealt with by the Cluj one, set up on June 22, 1945, which in general pronounced harsher sentences (thirty people condemned to death and fifty-two to hard labor for life). [...] The first trial held by the Bucharest People's Tribunal ended on May 22, 1945. General Nicolae Macici and Constantin Trestorianu as well as Corneliu Calotescu and others, were found guilty of the massacres perpetrated in occupied Odessa and in nearby Dalnic on October 21-22, 1941 and sentenced to death; other members of the Romanian forces received varying prison sentences. On July 1, 1945, King Michael commuted Macici's sentence to life imprisonment; Macici would eventually die in Aiud prison in 1950. [General Corneliu Calotescu, formerly plenipotentiary Governor of Bukovina, was among this group of 29 officers sentenced to death for war crimes on 22 May 1945. The sentence was commuted to life imprisonment but he was released in an amnesty in 1955.] Altogether, fourty-eight death sentences were pronounced by 'Old Kingdom' and southern Transylvania-based People's Tribunal, but only four were actually carried out, the others being either commuted to hard labor for life or decreed in absentia. None of the sentences handed down in northern Transylvania were implemented, and the leading people charged there had anyway left the region together with the Hungarian authorities. Although the People's Tribunals were liquidated in 1946, trials associated with 'crimes against peace' and other war-related charges would continue in the following years on the basis of law No. 291 of 1947, which stipulated sentences of between fifteen years and life imprisonment for such offences."