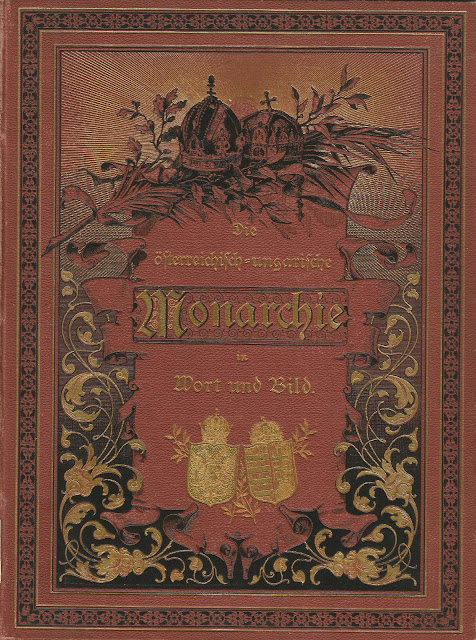 The World of Habsburgs: "Crown Prince Rudolf initiated a compendium on the Habsburg empire, intended as a peace project to unite different peoples and thus to save the crumbling Monarchy. Excluded from the political life of the court by the conservative figures surrounding his father due to his liberal and progressive ideas, Rudolf made his own mark when, in 1884, he initiated the monumental encyclopaedia Die österreichisch-ungarische Monarchie in Wort und Bild (‚The Austro-Hungarian Empire in Words and Pictures‘), named after him as the ‘Kronprinzenwerk’. The work was a kind of compendium intended to record the entire empire with all of its peoples. The Kronprinzenwerk was certainly impressive in statistical terms; over a period of 17 years, from 1885 to 1902, there appeared 397 individually-published instalments which were sent every two weeks to subscribers. In total, the project comprised 24 volumes containing 587 articles by over 400 authors (largely locally-based folklorists who themselves belonged to the ethnic group being investigated) and around 4,500 illustrations by 264 artists from across the Crown Lands. It was thus the biggest work published by the Imperial-Royal Court and State Publishing House. In keeping with the dualistic structure of the Monarchy, a German and a Hungarian edition were prepared by two separate teams of editors – in parallel, but differing somewhat in terms of content, the Hungarian version being primarily directed at an urban middle-class target audience. Great hopes were placed in the work, at least at the beginning, both by the publishers and the press, which gave it considerable public attention in the 1880s. Against the background of the virulent conflicts between the Monarchy’s nationalities which took place during this decade, the work was intended to be a peace project linking people together and directed against all separatist forces; through the communication of knowledge, it aimed to bring reconciliation and strengthen solidarity within the Danube Monarchy. Following Rudolf’s death, and with the shifting of the topics dealt with in the volumes from the centre to the periphery of the empire, public interest increasingly evaporated. Today, a complete edition of the Kronprinzenwerk is a much-sought-after collector’s item. (Julia Teresa Friehs)"