The Autobiography of Dr. Emanuel Merdinger 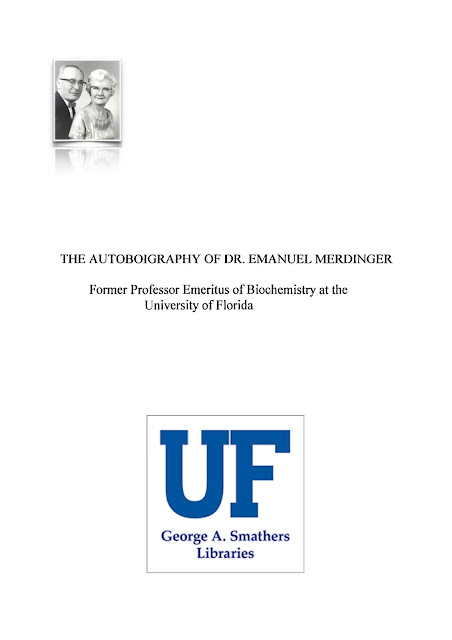 UF George A. Smathers Libraries: Emanuel Merdinger was born on March 29, 1906 in Suceava, then part of the Austro-Hungarian Empire, today in Romania. He completed an M.S. degree in pharmacology from the German University of Prague in 1931, then begun graduate studies at the University of Ferrara in Italy. In Ferrara, Dr. Merdinger managed to complete a PhD in Pharmacy and, a year later, in Chemistry. In 1935, he began teaching chemistry in the University of Ferrara's School of Engineering. In 1938 Dr. Merdinger lost his position at the university and taught at a private Jewish school. At the outbreak of WWII, he offered his services to the French army through the French Consulate in Ferrara, but was caught by the Fascist Police and harassed until he was sent to a concentration camp in the District of Vinnytsia, Ukraine. He was liberated by the Russian army in 1944 and stayed in Russia as a government toxicologist for another 11 months before returning to his post at the University of Ferrara. In 1947 he immigrated to the United States through the help of his sister living there. He obtained a position at Roosevelt University, the first during his long academic career in the U.S. There he also met his wife, Raidie Poole, who at the time worked as the university nurse. He held several high ranking posts at the Illinois State Academy of Science in the early 1970s. In 1976 he moved to Gainesville and worked for the U.S. Agricultural Laboratory. In 1978, he became a professor at UF and taught there until 1991. His contribution to the University was recognized by the University president. He served as the National Academy of Sciences exchange scientist to Romania (1971, 1972, and 1975) and Bulgaria (1974-1975). Dr. Merdinger was Professor Emeritus of the University of Florida until his death on December 12, 1997.

Email ThisBlogThis!Share to TwitterShare to FacebookShare to Pinterest
Labels: 1997, English