Remark: The primary source for Yevgeniya Finkel’s research was the "Report of the 'Soviet Extraordinary Commission' for Czernowitz“. There is no doubt that Yevgeniya Finkel conducted the research with the greatest possible care. But, considering her very limited access to other sources and poor research conditions, there is no guarantee of any kind that the information it contains is accurate and/or complete.

Dr. Svetlana Frunchak: "Numerous Holocaust survivors’ memoirs concerning Bukovina were either written by survivors themselves or based on interviews with them. Many were published in Israel by Yad Vashem; others appeared in Germany, North America, and Ukraine. A particularly important source on the history of the Holocaust in Northern Bukovina and, to a lesser extent, neighboring regions, is a series published [by Yevgeniya Finkel] between 1991 and 1996 as the Herald of the [Eliezer Steinbarg] Society of Jewish Culture in Chernivtsi, with the support of the Association of the Prisoners of Nazi Ghettos and Concentration Camps and the Chernivtsi State Archive. The five issues of the Herald contained numerous recollections of Holocaust survivors who lived in Bukovina before, during, or after World War II; surveys of the Chernivtsi State Archive’s holdings concerning the Holocaust; lists of victims, perpetrators, and rescuers in various locations in Northern Bukovina; locations of mass executions and graves; and other related materials." 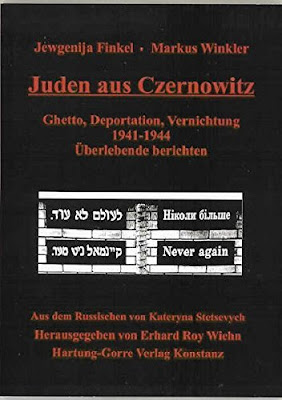 Courtesy: The Chernivtsi Museum of the History and Culture of Bukovinian Jews
Published by Edgar Hauster